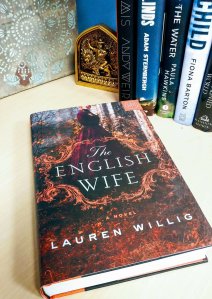 To start out, it took me days to get through the first chapter because I was completely bored out of my mind with what I thought was the whiny character of Janie. But once I finally got going, Janie became a very special character to me – One I think I relate with more than any other character I have read so far.

The English Wife is the troubled tale of the American Van Duyvil family – Bay and Janie Van Duyvil who are brother and sister, Annabelle/Georgie Van Duyvil who is Bay’s wife, Alva Van Duyvil the mother of Bay and Janie and Anne Newland who is the cousin of Bay and Janie- who cross paths with the Lacey family from London. Each character has secrets they are holding onto and masks they are hiding behind. As Bay and Annabelle, also known as Georgie throughout the story, find one another in London and fall in love, bringing Annabelle/Georgie into the Van Duyvil family across the ocean in America will not be easy as anyone thinks. The story opens with the death of Bay and Annabelle and we are whisked through the backstory that parallels with the after-story to find out what exactly happened to Bay and Annabelle but also how their relationship started, developed and ultimately ended in their deaths. The story is riveting, filled with constant character development and rich in its descriptions of costume and the people in the story.

As I said in the beginning, I struggled to get going on this story because of Janie. She is initially introduced in such a way that I was weary from her timid demeanor and inability to stand up for herself. However, she goes through more growth in this book – paralleled with that of Annabelle/Georgie’s character – that I began to truly understand what made her such an important character. Watching her go from her timid beginning to her brazen and self-confident ending in this story was heart-warming and reminded me why I enjoy well written character development in the stories I read.

One thought on “Book Review – The English Wife by Lauren Willig”