Keiko Ishida had always been so thoughtful and well liked. I didn’t think anyone could hate her enough to kill her in such a gruesome way.

Rainbirds was my book of choice in my March Book of the Month box. The quote seen above is from the end of the first chapter and is what gripped me into reading the rest of it. 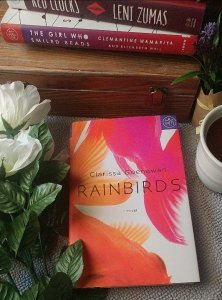 I read it in a few days, as it was an easy read from start to finish.

An interesting premise as I always enjoy reading mystery novels, especially those where a family member is trying to find out how someone died.

Ren Ishida has just learned that his sister, Keiko, was murdered. As he travels back to the small town she was living in to gather her belongings, he inserts himself into the life she had been living in an attempt to find out what happened to her.

While the characters were well developed and had a good story surrounding them, the story was simplified and seemed to be a little too easy to figure out.

Ren Ishida was able to kind of fall into all the clues and had people around him that handed him all the information he would need to find out how his sister died.

There was a good amount of depth within the unraveling of his relationship with his sister and allowing him to find peace with her death but there really was a big piece missing in the story itself.

What I liked most was the detail in Ren’s thought processes. The way he questions himself and the inner dialogue that he experiences. Rich in thought provoking detail but lacking in well developed mystery elements.