Archetypes are on the rise in the literary world. We are seeing a rise in books dominating with strong female leads as well as the entanglement of various kinds of relationship in the romance genres. As a reader, I do enjoy the strong femal archetype, being a woman myself, but I also prefer to read stories with strong male characters as well. It can be difficult at times to manage both a strong female AND male character.

Katherine Arden managed to bring these two characteristics together in a powerful way within the world she created in her trilogy: Winternight. Book 1 and 2 are currently available, while we all anxiously await the release of Book 3 in January, 2019.

However, I bring these books to light because of how well they demonstrate strong female and male characters while also incorporating the trope of enemies to lovers. In all respects, Vasya and Morozco are enemies. Morozco is a frost demon whose responsibility it is to take the souls of those dying in the winter cold and help them in their transition to the other side. He is the bringer of death and symbolizes all that is dark in this story. On the other hand, we have Vasya, who is full of life and has the hidden ability to communce with the earth spirits. She uses her ability to try and help these spirits stay strong as they are struggling to survive in a changing environment where the community no longer wants them there.

Therefore, we have Vasya who symbolizes earth, regeneration and life and then we have Morozco who symbolizes death and dying. When Vasya is dying in a winter storm and Morozco arrives to take her, he is moved by her strong spirit, as well as her connection to the spirit realm. Rather than take her, he chooses to help her. Taking her back to his home and nurses her back to health.

It is a powerful and moving trope between Vasya and Morozco. Highly recommended if you are wanting to read something with these attributes involved.

See below for my abbreviated reviews of Book 1 and 2.

The Bear and the Nightingale – Goodreads

The Girl in the Tower – Goodreads

I loved this story because of the strong female character coupled with that of traditional fairy tale lore. Vasya is not your modern warrior-woman that is being so coveted in today’s writing, but a classically strong woman who wants to embrace her life and live the joys that she finds in it. Not wanting to be bound to child-bearing, she wants to experience the world, nature, and be one with that world around her. She is strong-willed, but also understands how to interact within the confines of what she has been given. As she continues to find herself throughout this journey, she realizes that she can go out and have the life she wants. Although, you can bet, that Morozco will be following her every move… for he cannot afford to lose her – he is intrinsically tied to her now.

Morozco, much like Vasya, is a strong-willed character. He is the physical manifestation of the frost-demon that everyone fears. He is responsible for claiming the lives of those caught in the cold and dying; he considers himself death; a cold and unwanting man. However, the fire inside of Vasya that he sees and experiences, starts to change things within him. Their love for another, while delicate, is intense. 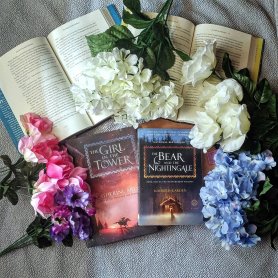 Vasya continued to amaze me with her bravery and selflessness as she learns what it is to be grown and alive in the harsh adult world of men. Battling with her growing powers and awareness of the spirit realm around her, dangerous forces continue to try and use her for their own advantage.

The love story continues between Morozco and Vasya as their relationship delves into the depths of their very souls and they embrace one another during a powerful fire only to be quickly separated as they usually are. Will they ever be able to find some peace with one another in the final edition of this trilogy or will they forever be kept apart as mortal and immortal? Their deep longing for one another combined with the veracity of Vasya’s wildness, is as captivating as it is haunting.

As she continues to endure the pain and suffering of losing those she loves, she also finds more of herself than she ever believed she could. Starting out as a lost traveler wanting to see the world, she finds she need not travel far to find the adventure she so dearly longs for.