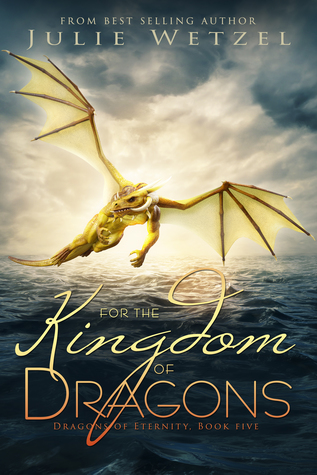 It’s a dark day for the kingdom of dragons.

Kyle Markel, the King of Dragons, is presumed dead when his plane disappears over the cold waters of the Northern Sound. To make matters worse, his sister, Carissa Markel, has been given undeniable proof that Kyle’s longtime friend, Daniel Callaghan, has been sabotaging the largest investigation Eternity has ever had. He may have also been involved with Kyle’s disappearance.

But all is not what it seems.

That’s something Angela Lewis discovers when she’s awoken in the middle of the night by a strange and violent ceremony. Her quick thinking frees the handsome man tied to the table, but the knife in his chest makes his survival questionable. Unsure who to trust, she finds herself running to the only place the stranger is willing to go—The Dragon’s Wing.

Can Angela find someone to save him? And without their king, what will become of the kingdom of dragons? 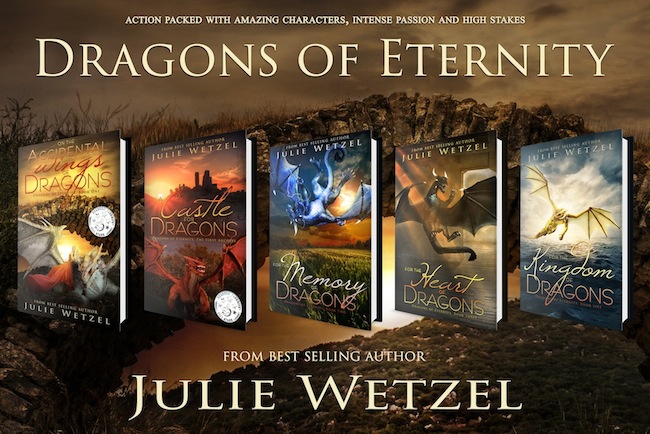 “Lady Markel,” Daniel said as he and Michael came closer. “We need to talk.”

Concern washed over Carissa as she looked up at the head of Eternity. She laid her cards on the table before standing to face the men. Leaning forwards, she accepted a soft kiss from Michael so she could magically borrow his voice. “What’s the problem?” Carissa asked as she refocused on Daniel. There was something in the way he stood that worried her.

“There’s been an accident.”

Dread shot through Carissa. “What happened?” Taking a step away from the table, she reached to Michael for comfort.

He took her hand and moved so he was standing behind her.

Daniel glanced down at the three women still sitting around the table. He swallowed before meeting Carissa’s eyes again. “It’s your brother.”

Carissa’s knees went weak, and she was glad for Michael’s arms around her. She leaned back into him, steadying herself for the next words out of Daniel’s mouth. “And?” she asked, dreading the worst.

“Yes,” Carissa said. “They were going to talk about some new legislation concerning dragons.”

Daniel nodded. “He never made it.”

Carissa stared at him in disbelief.

“I got a call from FAA. About thirty minutes into the flight, air traffic control received a distress signal from Kyle’s plane.” Daniel’s voice was bleak. “They were having trouble with the engines. A few minutes later, they lost both radio and radar contact with the plane.”

A shiver of fear ran through Carissa. “Where did they go down?”

“Somewhere over the Northern Sound.”

A blip of hope bloomed in Carissa’s heart. There was a higher chance of Kyle surviving a water landing than a land crash. “And?”

Apprehension filled Daniel’s eyes. “The Coast Guard has a search and rescue team on the water, and I’ve already sent a flight of dragons to help,” he explained. “But I need you to prepare for the worse. The temperature in the sound is frigid this time of year. If they can’t find him within the next hour, they aren’t likely to find him at all.”

Tears welled in Carissa’s eyes and she opened her mouth to breath. Shivers raised goosebumps along her arms as panic raced up her spine. “Do what you can.”

“I will.” Daniel raised his eyes to meet Michael’s gaze. “I’m going to go help with the search. Stay with her.”

Michael nodded and tightened his hold on Carissa.

Daniel brushed his hand over her arm to comfort her. “I’ll call as soon as I know something.” 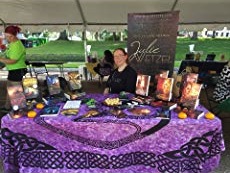 Originally from Ohio, Julie always dreamed of a job in science. Either shooting for the stars or delving into the mysteries of volcanoes. But, life never leads where you expect. In 2007, she moved to Mississippi to be with her significant other.

Now a mother of a hyperactive red headed boy, what time she’s not chasing down dirty socks and unsticking toys from the ceiling is spent crafting worlds readers can get lost it. Julie is a self-proclaimed bibliophile and lover of big words. She likes hiking, frogs, interesting earrings, and a plethora of other fun things.

And with the Kindling Flames series, she is now an Internationally Best-Selling Author.