The Search for Rasha

By Paul B. Skousen 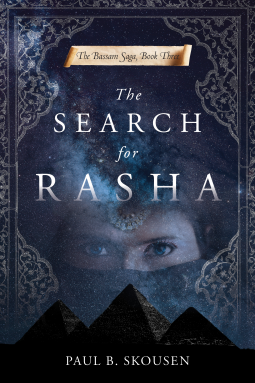 Skousen’s descriptions of the various places in Egypt are breathtaking and transport you to a place and time you know you don’t have consciously stored in your memory bank. But you feel like you’ve been there, that you’re there with the characters. Feeling, smelling and tasting everything that they are.

Our story begins with a narrator who is retrieving ancient scrolls from a tomb and transporting us into the story of Bassam and Rasha. Young lovebirds and heirs to Rasha’s family dynasty, they find themselves in the middle of a tragic incident. Rasha is kidnapped and taken across the desert to be held for ransom.

The leader of the kidnapper’s camel caravan realizes that Rasha needs help and gets her out of the impending situation, but they are quickly on the run and trying to get her back home before they are caught. You hear the story from both Rasha and Bassam’s perspective. Quickly transitioning away from Rasha altogether as you are left hanging and wondering whether she is alive, lost in the desert, or found her way home.

Bassam and his two men, Fawzi and Ammar, traveled up the Nilus (Nile), across hot deserts and face-off with dangerous and wild animals. All on their two year journey to find out what happened to Rasha and hopefully rescue her.

One of the things that this story really reminded me of was how difficult travelling was during these times and the actual length of time it took to get from one place to another.

Overall a fantastic epic written with love and care for preserving historical relevance and antiquity. A romance between Bassam and Rasha that transcends time and experience that even the harsh deserts of Egypt cannot remove their love for one another.

The Search for Rasha is the breathtaking third installment in the epoch Bassam
Saga. The frantic race to find Rasha before her captors spill her blood concludes
with a desperate climb up the midnight side of the great pyramid of Khufu.
Only silence and stealth give hope to the one-way dash up the ancient stone
blocks. Just one slip stood between life and certain death some 400 feet below
on the shrouded desert floor.

The Bassam Saga is a three-part series that takes 17-year old Bassam from
his home and his love interest, 15-year old Rasha, on a two year trek with her
father, Zafir, from the high deserts in Saudi Arabia to the grand trading city of
Ch’ang, China. Along the way, Bassam is taught the secrets cryptically recorded
in seven secret scrolls, ancient scrolls that claim to hold the grand keys to
prosperity and peace.

Misfortune befalls the caravan and Zafir must return to their home in Rekeem.
Along the way an urgent message of an attack on their village sends
Bassam on a new urgent rescue mission to find his beloved Rasha. From the
head waters of the Nile to a dangerous escape up the dark side of the Great
Pyramid, we learn of the ultimate fate of Bassam and his Rasha. It is an historical
adventure, trial by fire, and message of timeless value, for all ages.

About the Author: Paul B. Skousen enjoys visiting the Middle East for archeology digs or just renewing friendships. He is a journalist by trade, received an MA at Georgetown University, worked as an analyst at the CIA, and was assigned to the Situation Room as an intelligence officer at the White House. He is a professor of communications, and the author of the three-volume Bassam series and several non-fiction books on politics and history