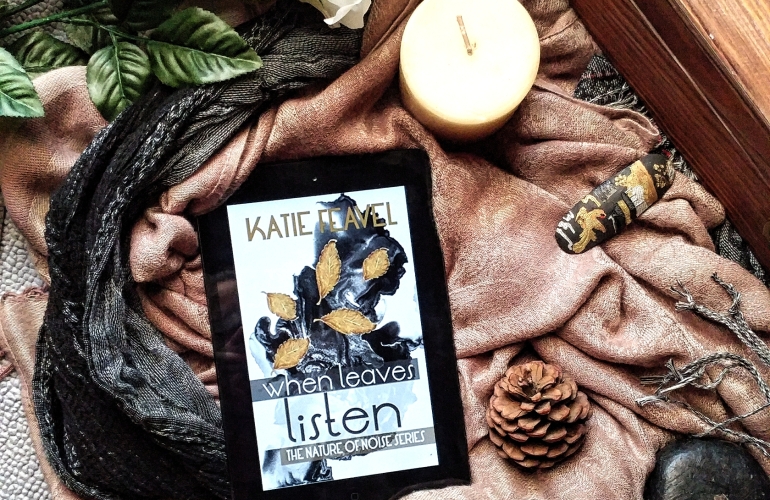 Dorothy May Noles is 14 years old and a rupture between her world and the world of Sum has just turned her life upside down. Sum is a world that lives parallel to ours and Orville Zaide has just brought the two together. Zaide is a ruthless ruler, leaving his people ready to revolt and the only thing standing in his way is the Prophecy told of a young girl with golden curls that will unite the people and bring peace. Orville’s only goal at this point is to kill Dorothy and keep her from fulfilling the Prophecy.

Young adult fans alike are going to be overjoyed by this book that is the first in a planned series of books called “The Nature of Noise”! “When Leaves Listen” introduces us to Dorothy (better known by her friends at Dottie) and her band of misfit friends. It all starts on a fun night out where they’re playing their favorite hide-and-seek game, when a MASSIVE earthquake (or so it seems) interrupts everything. Including their own lives. The city around them has been destroyed and they all have to come to terms with the enormous losses they have all just suffered – all of their family members are missing or dead.

The story alternates between Dottie’s perspective and then that of the differing inhabitants of the parallel universe, Sum. We meet Orville Zaide (typical bad guy) and his evil doing children servants, Ruya (prophetic seer) and an assortment of low-class citizens that are ready to rebel against their self-proclaimed leader, Orville. Now, Orville is actually from Earth and was a science student when he figured out how to cross between the worlds. Since then, he placed himself into power as the leader of the people of Sum and they are sick of his dictator tactics.

This story flows very well and keeps you engaged as you read through, transitioning between perspectives and learning how everything unfolds. As I started to get closer to the end, I realized it was going to leave me hanging for the next installment – AND IT SURE DID.

I was slightly annoyed with Dottie’s constant self-deprecating attitude. She believes she is always the one to blame for everything and that no one likes her. We do see her start to transition from this frame of mind towards the end of the book as she starts to realize that the people around her are there because they DO care about her, not because she’s just some pity case.

Anywhooo – I greatly enjoyed this book and highly recommend it to any YA fans out there. Get your hands on it for free over at Inkitt (link above) and find out for yourself. Then we can all hold onto our seats while we wait for book #2.